Madame Marissa facesat on her boyfriend when they had a fight. They had abused each other with words but when he tried to hit her, she surprised him by ducking and then throwing him down. She choked him with her ass as she facesat on him. She immobilized him by tying him up and making him apologize. He was scared of what she could do to him and he apologized.

Lady Kelly wanted to show her friend how to deal with losers and slaves who messed with her. Since her friend did not have a slave or a loser to be degraded, lady Kelly chose to humiliate him. She did so using her bare feet. She had her friend lick her feet as well as her high heels. She dominated her and told her that was the best way for her to learn.

Lady Amy and mistress Zora are not your average mistresses. They love to degrade and to dominate. They wanted this loser degraded so they made him eat their saliva. They would eat some grapes and then halfway through chewing them, they would spit them into his mouth. He was degraded but he did not have a choice and he ate what they gave him. He avoided them because he did not want such punishment again.

Mistress BlackDiamoond wanted to upload a new video to her blog because she had not done so in a while. She got a loser to humiliate and she degraded him cruelly. She had him lick her ass, smell her farts and then used him as her human ashtray. She also blew smoke on his face to choke him before she felt it was enough for the poor loser who was nearly crying.

Princess Jasmin was angry at her slave and she had to punish him. She had given him some work to do but he had not done it. She felt like he did not respect her and she was not going to allow that to happen. She forced the loser to lick her heels and when he was done with her feet, she made him do the same to her bare feet. She also trampled his cock and balls using her heels.

Mistress Nata was not in talking terms with her boyfriend. He had done something she had warned him against and she was pissed. She did not want to say something or do something she would later regret so she chose to keep quiet. She made him lick her bare feet as he insisted on talking to her and apologizing while she did not feel like talking to him or even looking at him.

Mistress Suzy caught this intruder and she did not bother calling the police. She kicked him in the balls and he was in a lot of pain. He fell on the floor and she continued crushing his balls as she warned him never to think of doing that again. She laughed at how he was in pain and asked him what he thought would happen when he decided to intrude in her house.

Mistress Natasha did not want anything to do with this loser. He was always stalking her and trying to impress her but she did not want any of it. She tried to warn him once but he did not pay attention. She chose to punish him as he had not heeded her call to stop following her. She used her high heels to crush his face and his fingers. She also made him lick her soles.

Princess Serena was angered by the way in which her slave was a snob. She did not want a snobbish person in her house so she taught him not to be one. She did it humiliatingly as she crushed some bananas and she got him to eat them both from her shoes as well as from the floor. She degraded him till he learned his lesson and never became a snob again.

Mistress Celeste was pissed off by the kind of work this loser had done. She wanted it done better and there was no more time. So she punished him in order to motivate him to do better. She used her dirty soles to do it. She forced the poor guy to lick her soles and she warned him that she would do worse things to him if he disappointed her again. 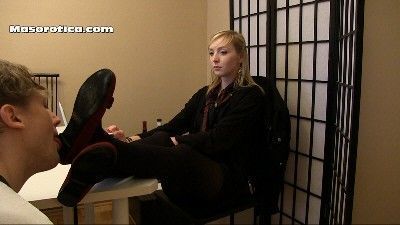