All articles tagged with "Domination"

Mistresses beat up slave as punishment

Three is better than one and that is what mistresses Mache, miss Irina and miss Katarina decided when they were disciplining this slave. They decided not to punish him individually but rather do it together. And they did. They trampled him using their high heels and inflicted a lot of pain and damage to his body. He was in so much pain that he could not talk properly. But the mistresses did not stop.

These Chinese mistresses were hired to beat up this guy. He had let out a secret he was told not to keep and now had to be punished. The mistresses tied him upside down and took time to beat him up. They kicked him on the balls, on the ass, on the face and trampled him with their high heels once they had untied him. They made him regret ever letting out that secret.

Madame Marissa tortures guy to get what she wants

Madame Marissa wanted this guy to do something for her fast. But the guy had trouble doing it as fast as she wanted. And that was a big problem. She could not take it. She gave him an incentive to work harder and faster because she did not have time. She trampled his fingers and made him feel extreme pain. She told him she would do worse if he did not give her what she wanted in time.

Lady Mimibu gets the grade she wanted

Lady Mimibu risked having a bad grade because of this professor who refused to grade her research paper. She was mad at him and she had to do something about it. She cornered him and humiliated him. She trampled him and stepped on his throat and cut off his air supply but let him go when he nearly choked. She trampled him painfully all over his face and made him give her the grade she wanted.

This mistress is a cruel one. She does not like male slaves. She prefers female ones. She enjoys humiliating them and making them do whatever it is she feels like having them do.Today she made her kneel down and she rode her like a horse. She would stop riding her and instead make her lick her sweaty and smelly socks or stand on her back. She just did whatever she felt like doing.

Mistress Lisa is a strong woman wearing a sleeveless flannel top and blue jeans. She puts a submissive male into a headlock. She clamps one hand on his mouth and nose to control his breathing. Mistress Lisa chokes him with her other arm. He knows not to struggle against her or she could easily snap his neck like a twig. In face, she might do just that if he pisses her off again.

Pio has athletes foot and her feet stink. She likes making her slave smell and even lick her feet with all that bad and pungent smell

Marissa is a sadist. She got excited when she learned of high heel trampling. She got herself a slave and had fun making him feel pain by trampling him

These friends wanted to try humiliating their slave together. Each was used to doing it on their own, and they wanted to do it at the same time. They did it and loved it and made it a tradition

Liz is a strong girl. She likes to test her strength against men and enjoys head locking and sleeper holding them to submission 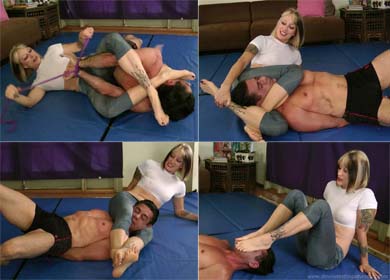